Latkes—fried patties made of potatoes and onions—are a traditional Jewish food eaten during Hanukkah, the festival of lights. My version of latkes use sweet potatoes which are much healthier than regular potatoes, and they are packed with fragrant Indian spices. I also prefer to cook them in smaller amounts of oil. I’ve made these for people who have never had Indian spices before and they were blown away by the mild, heady flavour.

Grate the sweet potatoes; I never peel them beforehand. This should be around 1000 g or 4½ -5 cups once grated.

Chop 1 large onion or a few small onions in order to end up with 1½ cups. With your hands, mix the onions and sweet potatoes into the spices, flour, and egg mixture. Form patties around 1cm in thickness. Any thicker and they won’t cook through.

Heat a non stick skillet over medium high heat and add enough vegetable oil to cover the bottom of the pan by ½ a centimeter.

Cook on both sides, and serve with maple syrup. The recipe makes around 15. If you make these in advance and the sweet potatoes let off liquid, don’t worry about it. Just squeeze out the excess liquid when you make your latkes. Any leftover latkes can be easily reheated in a dry skillet on both sides until warm and toasted! 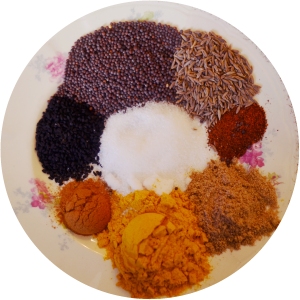 One thought on “Sweet Potato Latkes”