South Korea surprised me. Seoul, a bustling metropolis, is a dynamic modern city with efficient public transportation, pristine outdoor pedestrian areas, and people dressed to the nines. I recalculated its seemingly immaculate image as older ladies by the side of the road harassed me to buy their gimbap (Korean sushi) and I watched people jostling each other as they rummaged through large bins of 1000KRW (1USD) clothing. I squeezed through “noodle alley,” an indoor cafeteria with wall to wall bar stools in front of female vendors with their towering bowls of banchan (Korean side dishes) and noodles, crumpled napkins covered the floor.

During my time in SK I felt a real dichotomy between the modesty and organization and the chaos. Old ladies tugged on my shorts on the bus, trying to get more of my legs covered, and I witnessed a dog running loose at 5 am, ears dyed pink and its tail a vibrant yellow. I think that part of the appeal is that everything is very “comme il faut,” but with a deeply rebellious side which leaves room for the unexpected.

My friend and I were in SK for nearly a month. Here are a few things that stood out to us.

1. Sex motels and karaoke bars are cheap and abundant.

2. Couples like to dress matchy-matchy. His and hers light-pink track suits are the norm.

3. Google maps doesn’t ever properly load, so you need to get the Naver app for navigation.

4. Western pastries are all the rage so you can find perfect croissants and scones. But be warned of creative combinations: pizza with cream cheese, condensed milk, ham, garlic and corn.

5. The National Cemetery in Seoul is beautiful, tragic, and brimming with lush greenery. Plan to spend a few hours.

6. If you buy a rechargeable bus card for innercity transportation in Seoul or Busan and put money on it, it will work on every town’s innercity bus routes in the entire country. However, the city where you bought it is the only one where it can be topped up.

9. Koreans are lovely. Kind, helpful, and genuine. They love providing hiking directions, even when the trails are clearly marked.

10. Every hostel we stayed at was immaculate, provided a decent free breakfast, and had a shared kitchen for guest use. Unfortunately, complementary massages were not part of the deal, which would have been nice since the mattresses were rock hard, very thin, and were laid on wooden platforms.

11. Though the food was delicious, it was limiting, expensive, and lacked veggies. Once my friend and I left Seoul we were both feeling rather… backed up. We bought large quantities of fruits and vegetables proclaiming excitedly “for the poops!” Armed with a bottle of gochugang (Korean sweet and spicy red chili sauce) and Korean soya sauce, we cooked like crazy: brown rice salads, vegetable tofu stir fry, peanut butter noodles with scallions, a frittata filled with greens, garlicky mashed potatoes, carrot cabbage congee, and tomato tofu. We ate lots of peaches, plums, and nectarines. Thankfully we were soon back to our regular-ly scheduled program.

12. Hansando island isn’t worth it. Especially in 95% August humidity. Unless you want to be eaten by buggies and climb a trail that feels more like a step machine than hiking.

13. In the club: though it’s not proper to smoke in public, the air indoors is destined to become saturated with tobacco. Men are respectful of foreign women dancing and won’t come into your space… unless they’re trying to kiss you or smack your butt.

14. There is a penis park full of phallic sculptures to appease a young woman who died a virgin in order to ensure that fishing remains fruitful.

15. After 888 steps, we reached the top of Seoraksan national park, an absolutely spectacular climb with a temple half way up. At its summit we looked out into Kim Jong-Un’s backyard wondering if we were being studied in return, and if so, what would be made of our disheveled state, so contrary to Korean culture. 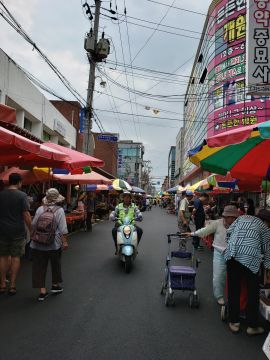 Scooter in a Korean market 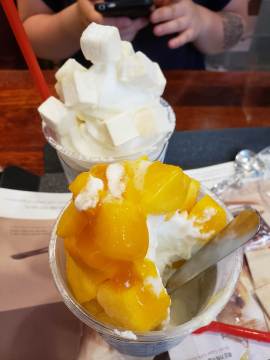 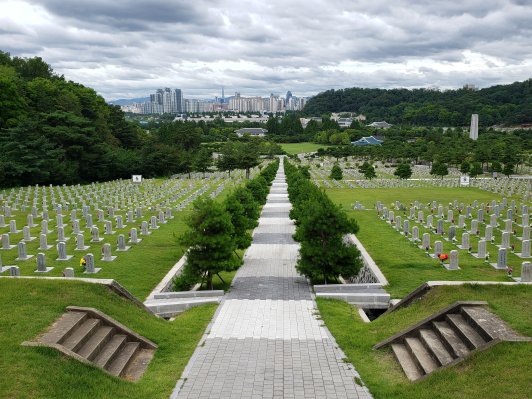 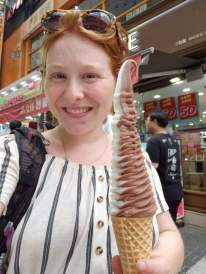 Healthy food with lots of vegetabls

One thought on “From street sushi to penis parks, here are 15 things to note before you go to South Korea”